Getting mortgage financing for manufactured homes

Buying a mobile home comes with a unique set of issues that don’t normally come up when buying brick-and-mortar, traditionally-built homes, especially when trying to get a — which is closer in size to a single-family home built on site — costs about $100,000, according to Homes Direct, a seller of manufactured homes. That’s about a third of the cost of traditional home, before the price of land is added.

“The lenders are thinking what can they get back if the borrower forecloses on the loan,” says Alexander Romanov, who buys homes in Washington state through iwillbuyhouse.com.

But getting a $100,000 mortgage can be difficult to get because it’s not high enough to be profitable for major lenders. A small loan amount can require paying a higher interest rate because the small loan won’t justify the origination costs.

Since government regulations limit how high banks can raise interest rates, borrowers may see higher closing costs that they’ll have to cover.

Borrowers with such small loans are also more likely to have high risk factors such as lower credit scores, less income, less emergency savings and less collateral value on the home than people taking out larger loans.

On June 15, 1976, a new rule from the Department of Housing and Urban Development, or HUD, required manufactured homes to have “HUD tags” to meet most lending guidelines. These certifications ensure that the manufacturer complies with safety standards created by HUD.

Before the rule, manufactured homes were prone to electrical and wiring problems that caused home fires, such as heating and cooking equipment being close to sleeping areas.

Mobile homes built before that date, even if they have modifications, can’t be accepted as compliant with the HUD code. The Federal Housing Administration, or FHA, doesn’t insure mortgages on manufactured homes built before June 15, 1976, and most other mortgage insurance forms follow the FHA policy.

Buying or selling a mobile home built before mid-1976 can be difficult, as Romanov found out with his business partner when they bought one in September 2017 with cash with the goal of cleaning it up and selling it for a quick profit. The mobile home was built in May 1976, one month before the new rule took effect.

“We lived through a nightmare scenario that no investor wants to go through,” he says.

Real estate agents didn’t know about the 1976 rule, and potential buyers had difficulty getting loans, he said. Ultimately, Romanov and his partner sold it in February 2018 after finding a lender for the buyers.

One way to help get a mortgage loan on a pre-1976 mobile home is to have a larger down payment, he said. Manufactured homes built after then should have the same loan and down payment terms as any other home loan, he said.

The FHA, VA and USDA have programs for manufactured homes, each with different rules such as higher down payments, higher fees, and better credit scores.

Is it really mobile?

Mobile homes can theoretically be moved, but it’s not easy. Still, the possibility of hitching up your mobile home to a truck and hauling it away can be enough to scare off some lenders who worry a borrower will ditch town with their new home and the bank won’t have an asset to collect. 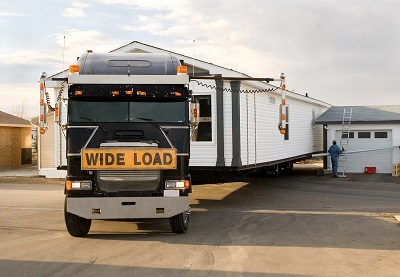 For that reason, HUD requires manufactured homes to pass a few steps so that they’re considered a house instead of a car. Otherwise, it can be considered a car and borrowers can instead get a car loan with a shorter term and higher interest rates.

To qualify as a house (and thus not a car), manufactured homes must have permanent sewer and water hookups, the entire property must be taxed as real estate, the towing hitch or running gear must have been removed, and the structural integrity must have been maintained during transportation and sufficient anchoring, according to HUD guidelines.

One of the biggest is that the mobile home must be on a foundation or tie-down. These make it a permanent home that isn’t mobile.

Another requirement after 1976 also makes it easier to prove to a lender that a manufactured house is classified as real property, Romanov says. Called a title elimination process, it gets rid of the Department of Motor Vehicles title required for mobile homes and just allows one title from the county recorder’s office for the real property.

Lenders prefer one title, he says. Title elimination can be done by the county ensuring the home is on a proper foundation.

Some lenders think mobile homes depreciate like vehicles and don’t increase in value like traditional housing. Getting a mobile home technically listed as real property, such as through title elimination, should help, though lenders may still not consider them good risks.

Romanov, who buys mobile homes and resells them, says he hasn’t found mobile homes to depreciate and that they follow the housing market just as traditional homes do. He bought a mobile home in Washington state for $105,000 and sold it for $170,000, and is in the process of buying another mobile home for $75,000 and expects to sell it for $170,000.

Having a real estate agent gather comparables for mobile homes sold in your area versus what they originally sold for may help convince a lender that the mobile home you want to buy tracks traditional home sales and doesn’t depreciate as much.

A real estate agent or mortgage broker should be able to help you find a lender for a mobile home mortgage.

If the home is built after 1976 and comes with land, the pretty much all lenders will finance the purchase, Romanov says. If it was built before 1976, it will probably be more difficult, though not impossible.

For the mobile home Romanov and his partner bought that was built before the HUD rule, they pulled a list of all banks and credit unions registered in the state of Washington and called or emailed each one until they found ones that would finance the purchase.

There are also personal property loans, also called chattel loans, to buy a manufactured home that isn’t permanently affixed to the real estate. They require at least 5 percent down and that the home be relatively new.

If you’re buying a mobile home on leased land, it will be harder to finance, Romanov says.

“I would contact the mobile home park manager and ask for their recommendations,” he says. “They will typically know which lenders will finance homes in their park.”

Manufactured homes depreciate in value due to their short lifespan. Depreciation is something to consider and finding lenders might be troublesome, but not impossible.